The World War I and II posters are part of the Oversize Collection, which consists of unbound items from various Regional History Center collections that are too large to store in regular archival boxes. The Oversize Collection contains five major groups of documents: posters and broadsides, photographs and prints, maps, newspapers, and certificates.

The war poster collection contains 629 posters from World Wars I and II depicting recruiting, morale, propaganda, and production incentive. A full listing of the World War I and II posters can be accessed in the PDF inventory.

More information about the Poster Collection can be found in the collection's finding aid.

We must fight two foes Two battlefields Abroad At home
Harley Davis, We must fight two foes. The German enemy abroad and the germ enemy at home. 1,500 Illinois soldiers have been sent home because they have tuberculosis. There will be more. They deserve the best care that is possible to provide. They offered to die for us - it is our duty to give for them. ... 100,000 additional cases of tuberculosis exist in Illinois' civilian population. Scores of them are to be found in this county. They are dying because there is no hospital to which they may go for renewed health. They are spreading this disease. You or some member of your family may be the next victim. Meet this danger to yourself, your family, your neighborhood and your county by voting: For the levy of a tax for a county tuberculosis sanitarium. The cost to you--The price of one square meal a year.

Are you worth dying for? Out of the fight
Harley Davis, Are you worth dying for? Our of the fight. Enroute home to enter tuberculosis sanitarium. Permanently injured enroute home. Our men are dying in France for you and yours. They are being killed by bullets and disease. Tuberculosis stalks in the trenches while shells burst overhead. There are 300,000 consumptives in Illinois. Help them in their fight for life. Help our sick soldiers and families here at home. Help protect yourself from tuberculosis. Buy Red Cross seals. Buy them early. Buy them often. They cost one cent. 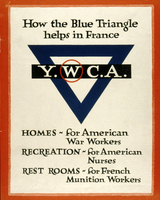